A couple of lucky shots here. It's amazing to me how they can reach like this without falling in but I suppose a judicious flap here and there helps defy gravity.
This would be her ladyship. We're hoping their eggs hatch any day.
Friday June 5 2015

I don't see other birds doing this single-wing flap. I call it Bluebird semaphore.
I've seen them both do it but I think himself does it more.
Wednesday June 3 2015

May 5 2015
After months of nothing, such that we let the house wrens move into the BB house, a pair of Bluebirds showed up on Saturday (just before Memorial Day US holiday), showing interest in occupying.
I removed the house wren nest (with 6 eggs) and the BBs immediately took over.
Of course the Wrens weren't too happy, but now I know they're BB egg destroyers I'm rather less fond of them. Either way, shortly after that I saw that they were moving into a 'wren house' I'd mounted under our deck years ago (but never seemed to be occupied).
Their nest with eggs was still somewhat intact so I carefully put it in a milk jug and hung it under the wren house. They noticed it right away and appeared to be reworking it when we left for our weekend.
Coming home today I'm glad to report that the Bluebirds are still around.
The wrens, however, appear to have abandoned the milk-jug nest for the wren house where I assume they've started over. 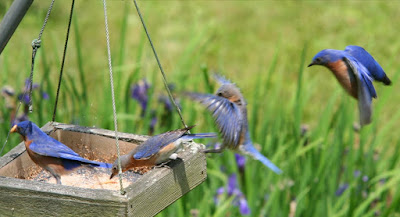 A composite of 3 shots. Male left and right, female is the middle two.
Eastern Bluebirds.
June 7 2015.
Posted by Gareth at 9:56 AM