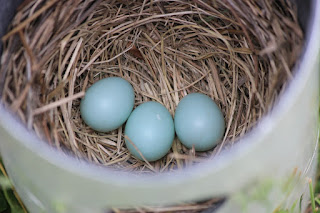 May 29: What better way to start a new chapter than with new eggs.
(Chapter 1 of Bluebird Chronicle is here.)
Having just raised four kids, maybe Ma said that's too much work and drew the line at three.

That said, a little story from yesterday. I was reflecting upon how I see Mrs. Bluebird still feeding the kids, but not Mr. Bluebird. Meanwhile, his/our enemy, Mr. House Sparrow, is seen taking food to his young'uns. Hmm.
Then something happened that really surprised me. A bluebird kid had landed on the tray and picked up a dried worm that it was just holding.
Along comes Pa and what does he do? He snatches it from Junior's grasp and eats it! I could hardly believe what I'd just seen.
Flash back to last time we had a (BB) family and I believe I do recall seeing some less-than-friendly behaviour by (perhaps the same?) father then.
On reflection, I think they're not-so-subtle hints to Junior that the blissful childhood is over and it's time to go and find his own little slice of heaven.
Ma and Pa are now focusing on a new family.

Come on baby, let's do the twist. 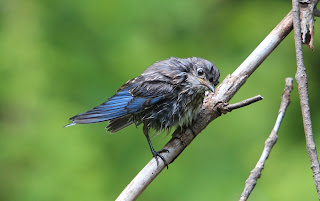 June 5: one of the kids after a bath.

At one point there were 5 eggs, but somebody somehow destroyed one. I found it on the ground. House Wren perhaps, what I'm thinking. 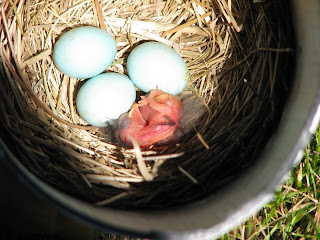 (But this one is alive and kicking) 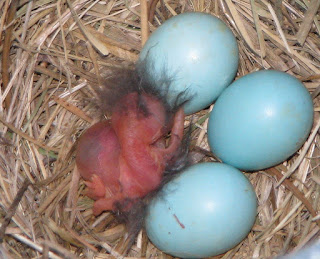 June 12: The first of the second four arrives.

June 14: Three out. Videos on YouTube:
Shaky and poorly focused but a bit more animated than the next one. 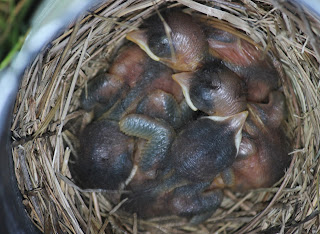 June 17: Four kids are starting to get fuzzy.
We didn't see any open eyes yet but they were resting.

June 22: Eyes open. This one responded to the camera flash.

Incidentally, this Bluebird family are lodged in a PVC house I made from the Gilbertson plan.  You can get a PDF of the design here, or read about and/or buy pre-made here. I am having less House Sparrow trouble this year with this design and am very enthusiastic about it. The ability to remove it for photography is obviously a huge plus. The only modification I made was with a hacksaw, cutting some shallow footholds to help them cling to the outside. 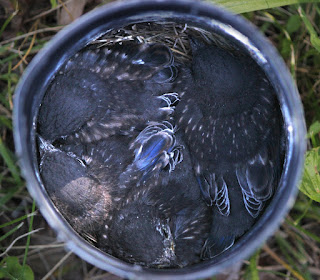 June 30: Himself. Frames from wide-angle video. 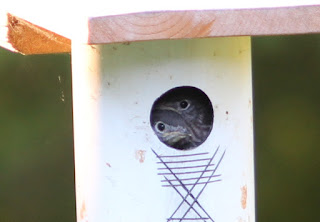 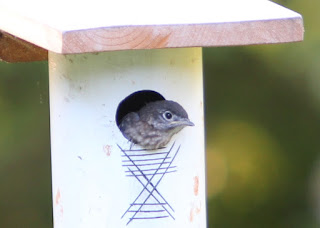 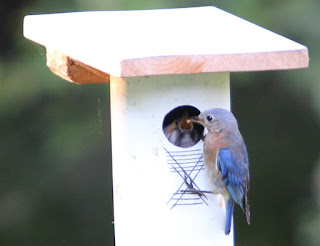 Update on the kids: they're still home. I assume all four are in there but I'm not going to open it up to count for fear of causing premature flight. 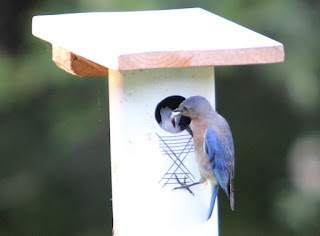 There is a little something I feel I'd be remiss if I didn't mention: the matter of poop removal. Hope it doesn't gross you out but it's rather fascinating. The kid will rotate and expel a fecal sac which the parent will then take away. How does the kid know to do that? In a video I shot today, Ma shows up with a worm, the kid does the about-face, Ma expects the sac but still has the worm so she swallows it... then the kid doesn't deliver! Win some lose some.
Posted by Gareth at 10:33 AM