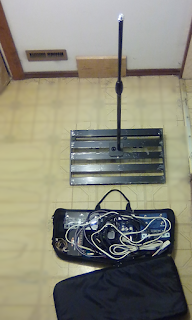 I'd been getting by with the Electro Harmonix pedal board/bag (bottom of above picture) for a while. However, after damaging the zipper it was a bit cumbersome as the top part could no longer be completely removed (thanks to my repair). Along with a mic stand it took up a fair amount of floor space, so when the Genesis (mid and top of above) went on sale again I jumped at it. Normal price $200, "stupid" deal $100 (excluding the pole which was another $20).

Attaching the Decibel Eleven power block underneath the pedalboard was the first order of business. 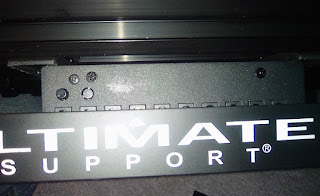 They provide some reasonable clamps for this but the spacing of the back panel is prohibitive, regardless of power block orientation. 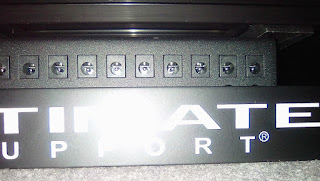 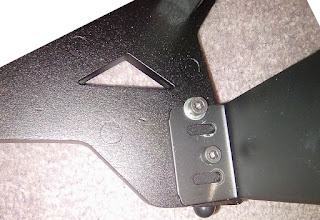 I decided to shift that panel down a bit. It wasn't a hard thing to do, just an extra project I hadn't bargained on. I didn't drill/tap any new holes in the sides, just one hole each end of the panel and notches for those edge screws. The above shows the new location, didn't photo the original from this angle but you can see the slots where the screws originally went. Note the picture at top left is diagonally cut off due to rotating it. The side piece slopes but not at such a steep angle. 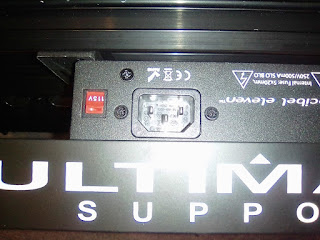 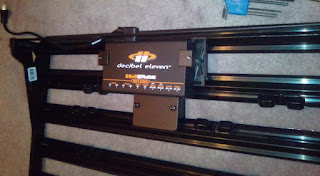 I don't really trust those clamps, especially as the knurled screws are really hard to turn being recessed between cross-beams as they are. I plan to modify that too. 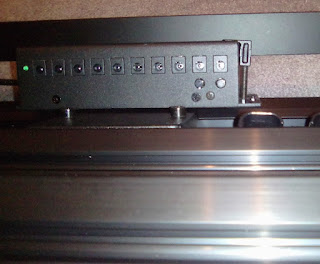 Speaking of pedals and mods:
Posted by Gareth at 6:52 AM