Birds: I love those flocking things! 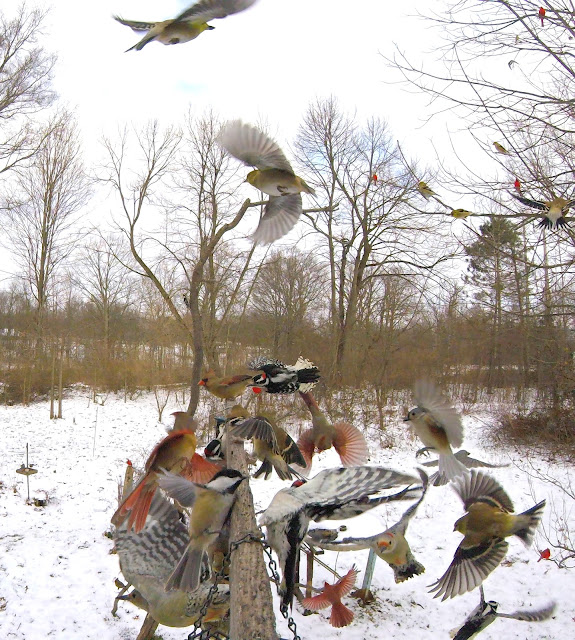 Oiseaux Out The Wazoo / Feathered Frenzy / Tableau Oiseaux
Like Spenser Quinn's dog Chet I'm fuzzy on the expression but like it anyway (wazoo). Thanks to cousin Ruth for the Tableau suggestion!
January 11, 2019
An amalgamation of maybe 15 culled from over 3 thousand GoPro shots. I didn't set out to do this, I was time-lapsing in hopes of catching the hawk that sometimes lands on our "strut" (from which we hang feeders). If I get a shot maybe we could ID it (the hawk).
Again, this is not one photograph of a single moment in time, it is a compilation of something like 15 different moments over the span of half an hour. While I don't use Photoshop, you could say it was "Photoshopped" or manipulated in a similar way.

To zoom in: click the picture, then right-click and "view image"
(browser dependent perhaps). In my browser (WaterFox) a "+" then appears with the pointer allowing me to magnify.

ID Key for the above:

?: Male Downy or possibly Hairy Woodpecker. It looks big enough to be the latter but that could be proximity to the camera. Any suggestions? The Hairy is a regular visitor but its usually not the male.
Another indicator is presence of black spots on white tail feathers, as can be clearly seen on the flying DM near center image (but I believe are always lacking on the Hairy). However, I've seen Downys where those spots are hard to see.

January 13
The GoPro captured the Hawk! I didn't find out until almost 24 hours later while examining the video evidence (felt like being on a cop show going through security tapes).
Thanks to Scott Judd for ID: Immature Coopers Hawk. 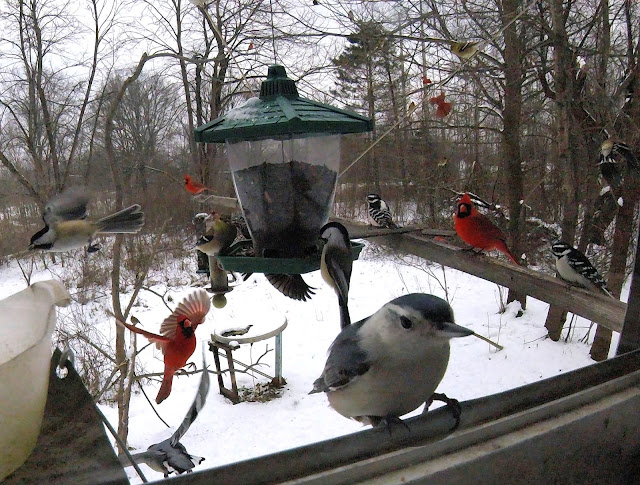 January 15, another composite centered on the feeder given me by Serena and Karen when I retired.

Jan. 31
Getting darker outside so I'm resorting to artificial light. Along with the single-digit temperature they seem to shrug it off.

This is the longer sequence that the "shrug" comes from.
I thought this was around sunset but had the time set wrong on my camera and couldn't verify.