EVERY SOLUTION CREATES A PROBLEM

Solution: Adult trike. Problem: How to transport the thing?
Although it will fit in the car (with the front wheel removed), I wanted it outside so we'd have room to pack for our holiday. Carriers can be found, but at costs exceeding what we paid for the trike in the first place. Ever the cheapskate, I opted for rolling my own.

I found one on Ebay that had 3 bolt-holes on each side for a bit over a hundred bucks (shipping included).

Not too hard to install as long as you're prepared to spend a little time under the car. In my case the prep work included running a 12mm tap through the somewhat rusty holes. I also wire-brushed the rusty areas I could reach and applied some (what is that stuff). In lieu of a tap extension I was able to use an 8mm 12-point socket, but the exhaust pipe blocked one of the holes so I had to reach around it with a regular tap-holder.

Tapping out those holes (which already exist conveniently threaded) was probably the trickiest part. It's really hard to be sure you're going in square to the original hole when it doesn't go in easily.

Of course you can always pay someone like U-Haul for a hitch plus installation. 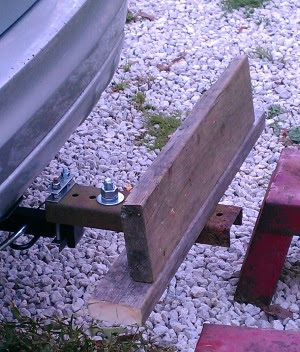 Using left over wood scraps and some channel I had lying around, I constructed this basic shelf to support the bike. My idea was to keep the trike as close to the car as possible, thinking the further out would be more leverage, more risk of structural failure.

Wanting to avoid drilling holes in the car, I mulled around several notions until I realized I could probably attach straps to the hatchback hinges.

I fashioned bits of scrap aluminium to nest into the existing hinges with room for strapping to comfortably loop around. It doesn't even touch weatherstripping, a rather satisfying solution! 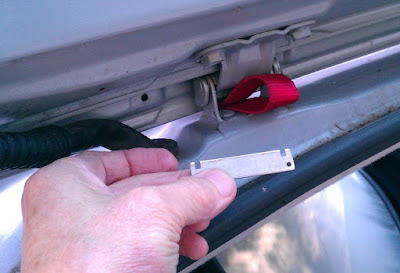 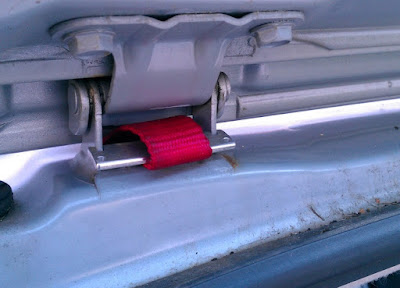 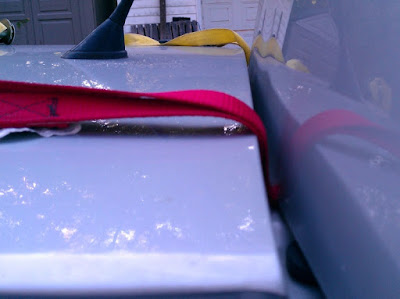 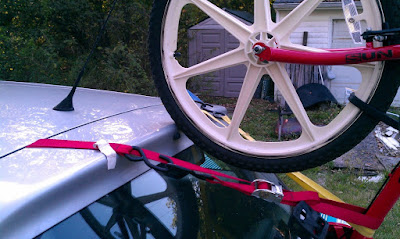 I'm thinking those straps will share the weight with the hitch-mounted shelf. Additional straps below will hold the bottom of the trike to the trailer hitch frame underneath, keeping the trike from bouncing around and pulling the rear wheels snug against the bumper. 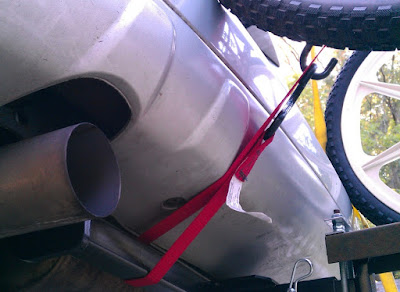 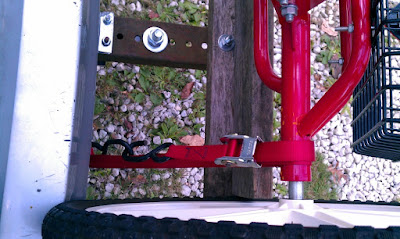 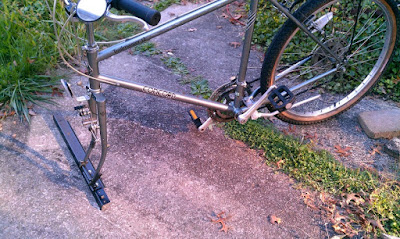 I also found a frugal path to a rooftop carrier for the other bike.
Not sure if I was strong enough to lift my rather heavy bike up that high, I wanted to be sure it could be stable in an upright position should I manage to get it that far.
Once again the 'every solution creates a problem' axiom kicked in. With the success of getting it up I found the next issue, getting it back down, also challenging.
Lacking a crane, I think a small step-ladder (plus assistant) will have to be part of the travel plan. 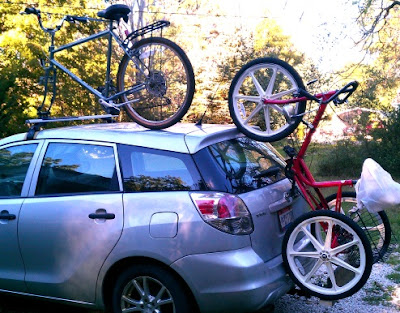 (This shot is prior to figuring out the strapping solution.) 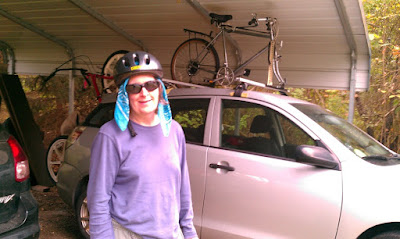 I really didn't expect it to fit under the shelter, but next time might remove the saddle!
(Sept 27, after 1st test-drive with the new arrangement)